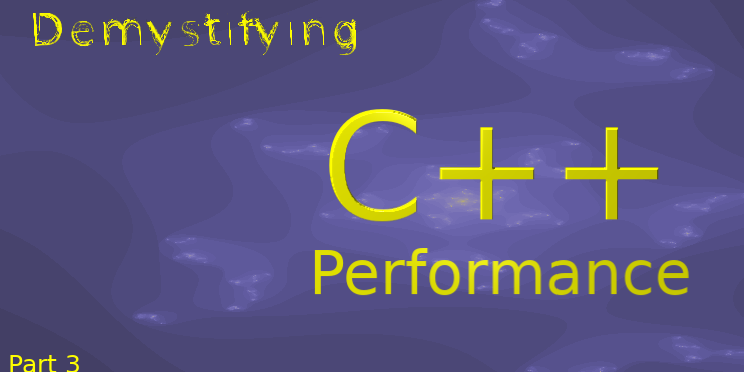 In this article we will meet some of the most catastrophic ways to kill performance in a C++ program: returning objects by value. We will see why it is so slow, and how this can be mitigated.

Still a few flaws to fix

Before we get deeper into the example, however, we must add one missing feature to the DynamicString class we introduced in the Part 2.

In the end of Part 2 we have added the copy constructor to be able to pass DynamicString instances by value without screwing up dynamic memory allocation due to “str” pointing to the same memory location.

There’s however still one case which is not handled correctly, let’s look at this short code snippet:

The output is as follows:

Why is this happening ? Because the compiler is translating the line

We recognise here the all too familiar “rep movsq” that we have seen many times before, doing a raw memory copy.

The default assignment operator in our example presents two problems:

Fortunately we have a little friend who can help us to track this kind of issues, a nifty tool called “valgrind”, which we invoke as follows:

“Move” is the name of our executable. Valgrind will spit out the following output:

Both problems are clearly shown in highlighted areas.

Our own assignment operator

(yes, no checks on str != nullptr to keep code short, as usual).

This looks very similar to the copy constructor we implemented in part 2:

There are two major differences:

What to return from the assignment operator

There are no rules imposed by the language about what you should return to from the assignment operator. You could, for instance, return void, or an integer, or whatever you like.

Normally the assignment operator is supposed to be chainable:

To achieve this we can either return (in our case) a DynamicString:

or a reference to a DynamicString:

The first solution allocates a temporary object on the stack using the copy constructor, and returns it.

The second solution just returns a reference to this, and is the preferred solution for two reasons:

Point 1. should be self-explanatory.

For Point 2 consider the following (rather absurd looking) snippet:

If the assignment operator returns a reference to this, then s1 is copied onto s2 (using the assignment operator), then the (currently not existing) DoSomething method is invoked on s2, not on a temporary object which is a copy of s2. This may make not much sense in this example, but they certainly do in the redefinition of the “<<” operator in C++ streams where multiple “<<” calls can be chained to log multiple items on a stream.

Heading for disaster: returning an object by value

Now that we have a complete DynamicString class (complete in terms of how it manages memory, not functionally complete as a string) let’s see what happens when we return an object by value.

Let’s look at this simple program:

To see what happens under the hood we need to instrument all methods inside DynamicString, let’s look at one of the constructors for example and we will instrument all other methods in the same fashion:

A couple of notes here:

Let’s now enjoy the disastrous output of this program:

This is what is happening in detail:

We are performing a lot of memory allocation / deallocation operations here:

Total impact of our little code: 3 malloc, 3 free. Not bad for such a little simple program.

The problem here is that in steps 2, 3 and 4 we are creating, assigning and destroying a temporary object whose only purpose is to get assigned to str1, when in fact what we want to do is to move its contents to str1.

The move operator comes into play

The assignment operator is when we want to copy the contents of an object (“that”) into “this”. This makes sense when “that” continues to be alive after the operation.

There are cases, however, when “that” is expected to die right after the operation has been completed; for instance, in our example:

The temporary object returned by NumberToString will be deallocated just after the assignment. Therefore, we want to move its contents to str, rather than copying it.

The move operator looks very much like the assignment operator, with a few differences:

As now “str” can be nullptr as a result of legitimate code and not only because of coding mistakes or runtime errors, we are obliged to protect the destructor:

Just by adding the move operator the output of our program becomes the following:

Adding the move assignment operator has saved us from 1 useless malloc and 1 useless free, without any change to application code.

Can we get any faster than this ? Yes we can, in two equivalent ways. Instead of:

In both cases the output will be as follows:

So what happened here…

Now try to beat that, Java 🙂 ! (or C# or Python or whichever other language is supposed to be “almost as efficient”)

Let’s assume we want to write a simple function to swap two strings. Like any well-behaved swap function, it needs a temporary variable to hold one of the values being swapped:

We can then invoke it as follows:

Thanks to our oh-so-powerful log functions in DynamicString’s methods, we can see this output:

Let’s focus on steps 4-7, the others are of little interest for us.

4) The copy constructor makes a copy of a. 1 malloc.

6) The assignment operator copies tmp into b. 1 free + malloc.

So a grand total of 3 malloc and 3 free. Pretty awful, considering that in the end all we have to do is swap two pointers. We surely could tweak DynamicString’s internals and actually swap two pointers, but this would break the object oriented encapsulation approach, wouldn’t it ?

Why are we making a copy of a in step 4 ? What we want to do is move a’s contents to tmp. We can do it by defining the move constructor for DynamicString:

The move constructor is very similar to the copy constructor, with a few differences we have already seen in the move assignment operator:

Unfortunately, in our “Swap” function the compiler has no way to know whether to use the copy constructor or the move constructor, and what to choose between assignment and move assignment. It will use copy operations, which are safer without “understanding” the meaning of the program.

If we want to use move operations we need to instruct the compiler accordingly:

std::move is declared in move.h, part of the standard C++ library, and it’s used to force the compiler to use move operations.

It internally casts its argument to the movable type, so the statement:

With these modifications the output is as follows (just showing the interesting bits) :

As can be seen, we are using only move operations, no memory allocation or deallocation is done, and efficiency is a high as it could ever be.

It’s a template function, it can be used on any copyable class, it will use the move operators if available, and it will scale down to copy operations otherwise.

Its implementation is very similar to our “Swap” function… mostly, I have to admit, because std::swap is where I started from to create the example.

In this very long article we have seen that a complete definition of all components of a class, especially when dealing with dynamic memory allocation, is equally crucial for correct behaviour and efficiency.

When managing any kind of resource (be it memory, files, handles, sockets…) there are simple golden rules to be always followed:

E-bike Motor Control Project by Soft-in
2 Luglio 2019
Search
Categories
Go to Top
We use cookies on our website to give you the most relevant experience. By clicking “Accept ”, you consent to the use of the cookies.
Accept
Manage consent

This website uses cookies to improve your experience while you navigate through the website. Out of these, the cookies that are categorized as necessary are stored on your browser as they are essential for the working of basic functionalities of the website. We also use third-party cookies that help us analyze and understand how you use this website. These cookies will be stored in your browser only with your consent. You also have the option to opt-out of these cookies. But opting out of some of these cookies may affect your browsing experience.
Necessary Sempre abilitato
Necessary cookies are absolutely essential for the website to function properly. These cookies ensure basic functionalities and security features of the website, anonymously.
Functional
Functional cookies help to perform certain functionalities like sharing the content of the website on social media platforms, collect feedbacks, and other third-party features.
Performance
Performance cookies are used to understand and analyze the key performance indexes of the website which helps in delivering a better user experience for the visitors.
Analytics
Analytical cookies are used to understand how visitors interact with the website. These cookies help provide information on metrics the number of visitors, bounce rate, traffic source, etc.
Advertisement
Advertisement cookies are used to provide visitors with relevant ads and marketing campaigns. These cookies track visitors across websites and collect information to provide customized ads.
Others
Other uncategorized cookies are those that are being analyzed and have not been classified into a category as yet.
ACCETTA E SALVA